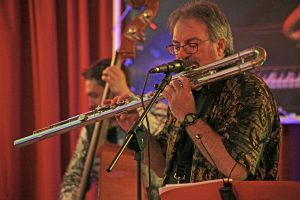 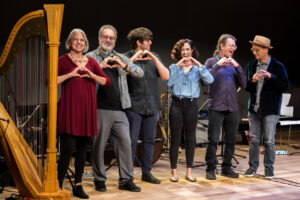 This unique ensemble is an outgrowth of Coke and Barber’s popular weekly Driveway Concert Series that ran from April 2020 through June 2021 in response to music gigs and gatherings being curtailed as a result of the pandemic. The duo performed outdoors, socially distanced, with each member of the sextet individually in turn, appearing as special guests. Playing music as a gift to their local neighborhood at first, the project took shape as the possibilities for meetings indoors returned.

The Monday night concerts made way for rehearsals, new composition, and the formation of an unusual and very accomplished performing and recording ensemble. They released their first CD together, The Emissary, in October 2021 to good reviews and now a year after the final driveway concert, a second CD is in the works.

As a founding member of the Creative Opportunity Orchestra with many projects and recordings to his credit, Emmy Award winning composer Carl Michel had this to say : “The 6tet is a welcomed opportunity to work again with my friend Alex Coke. The “driveway concerts,” that were presented by Elaine Barber and Alex to their neighborhood, provided a way to collaborate with other musicians over the course of the pandemic shutdown. That process initiated the formation of the 6tet, a unique collaboration of instruments with some great musicians. This collaboration has opened up my palette in composition and arranging for these individuals.”

For the upcoming performance and live recording, works will include new arrangements of music by Thelonious Monk, John Coltrane, Valentyn Silvestrov, and Paul Motian with some new compositions by Coke and Michel in the mix .

One of the first jazz ensembles to perform at KMFA’s Draylen Mason Studio, the concert on June 9 is for an all ages audience. Presale Tickets are on sale now and will also be available at the door.

This performance is made possible in part thanks to The Liminal Sound Series, dedicated to the commissioning of new works and collaborations between visionary composers and Austin, TX. based musicians and performers.

“They can drift with meditative beauty or roar with passion… their collective sound lingers in the memory.” – Jerome Wilson on The Emissary at All About Jazz 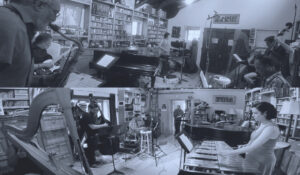 Alex Coke and Carl Michel-Jazz at the Draylen Mason Studio

Jazz composers Alex Coke and Carl Michel will present an evening of their own and others’ works this October 20, 2021 at 7:30pm in the new State-of-the-Art Draylen Mason Studio.
Home of classical radio station KMFA, Coke and Michel’s sextet will be the first jazz group to be presented in the new space.

Performing compelling music with origins in jazz, classical, folk,
extended technique and improvisation, this unique ensemble is an outgrowth of Coke and Barber’s popular weekly Driveway Concert Series that ran from April 2020 through June 2021.
Each individual member of the sextet was featured as a special guest
during the series.

The evening concert and accompanying CD feature music from a new recording, entitled The Emissary, inspired by artist Christopher Hynes, whose painting of the same name graces the CD cover.

With the reimagining of compositions penned by Coke, Michel, Paul Motian, Hildegard von Bingen, and Huddie Ledbetter (Leadbelly), and an exciting new CD to see and hear, the evening promises to be a stellar experience of art, music, and culture.

Welcoming any and all interested ears, the studio will have an open, general admission seating plan to allow for social distancing. Masks are required and all ages are welcome.
Tickets are $20 or $35 with a CD.
Presales are encouraged as seats are limited.
Tickets on sale here

Saxophone/Flutist Alex Coke takes the stage in quartet at Monks Jazz joined by Bruce Saunders on guitar Michael Stevens on bass, and Masumi Jones on drums in an evening of memorable originals and uncommon standards for #ProjectSafetyNet.

The Austin Jazz Society will be awarding Alex and his Worthy Constituent, Rich Harney The Hall of Fame Award.

Grab a table for the in-studio audience or listen via YouTube livestream: