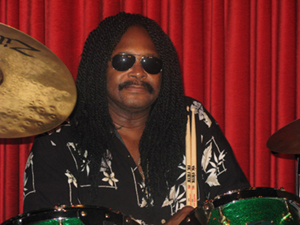 Chairman/CEO of Tenacious Records, composer, arranger, producer, multi-instrumentalist and actor ALPHONSE MOUZON has been composing and producing beautiful music that has captivated and enthralled audiences throughout the world for over two decades.

ALPHONSE MOUZON (who is an African American mixed with French and Blackfoot Indian) was born on November 21st in Charleston, South Carolina. He attended Bonds-Wilson High School where he received his early musical training under the direction of saxophonist high school music teacher Lonnie Hamilton III, and took some drum lessons from Charles Garner before playing gigs with the Lonnie Hamilton Band. Following graduation from high school, he moved to New York to study music and drama at New York City College and medicine at Manhattan Medical School. MOUZON took drum lessons from jazz pianist Billy Taylor’s drummer Bobby Thomas. While attending college, Alphonse played in the pit band of the Broadway show “PROMISES, PROMISES” after being recommended by Bobby Thomas. MOUZON also worked as a medical technologist at Columbia Presbyterian Hospital after graduating from Manhattan Medical School. However his medical career was short lived.

By 1969 his reputation as a player had spread to such an extent that a medical career was no longer attractive. By the early seventies, he had embarked upon a musical journey that would take him to almost every corner of the world and would establish his reputation as one the most creative musician of the era. In 1975 MOUZON studied acting at The Lee Strausberg Institute for Actors in Hollywood, California. In 1997 he studied acting with Susan Ricketts and in 1998 MOUZON studied advance voice-overs with Don Pitts at California State University of Northridge.

ALPHONSE MOUZON musical associations read like a veritable Who’s Who of Modern Jazz and Pop Music. His talents cover a broad range of musical disciplines and philosophies. He was the rhythmic foundation for the far reaching musical explorations of pianist McCoy Tyner. He was a charter member along with keyboardist Joe Zawinul and saxophonist Wayne Shorter, of the group Weather Report. Along with guitarist Larry Coryell, MOUZON was co-founder of The Eleventh House, the seminal fusion band of the seventies. Mouzon and Coryell still tour together in a trio and with the Eleventh House.

Besides radio, MOUZON’s music has been aired on CBS, NBC and ABC’s Daytime Television Soap Operas – “ALL MY CHILDREN”, “ANOTHER WORLD”, “AS THE WORLD TURNS”, “DAYS OF OUR LIVES”, “ONE LIFE TO LIVE”, “LOVING”, “GENERAL HOSPITAL”, “GENERATIONS”, “SANTA BARBARA”, “THE GUIDING LIGHT”, “SUNSET BEACH”, “PASSIONS”, and CBS SPORTS, “LIFE STYLES OF THE RICH AND FAMOUS”, “RUNAWAY WITH THE RICH AND FAMOUS”, “LEEZA”, “HARD COPY”, “ENTERTAINMENT TONIGHT”, and many more!

ALPHONSE MOUZON’S name can be found in just about every Jazz Encyclopedia/ Dictionary, and is listed the 2nd edition of Marquis Who’s Who In Entertainment and Who’s Who In The World. MOUZON was voted the #2 BEST MULTI-INSTRUMENTALIST in the 1995 Jazziz Magazine Annual Readers Poll.

At present, MOUZON performs in Europe and in the U.S. with his trio, quartet, or quintet and as a featured guest artist with other groups. ALPHONSE MOUZON also teaches drums at THE ALPHONSE MOUZON INTERNATIONAL PRIVATE DRUM SCHOOL in Northridge, CA. Tel: 818-368-6479.

See ALPHONSE MOUZON along with actor TOM HANKS in the 1996 film “THAT THING YOU DO”. ALPHONSE is acting and playing drums. He also composed the music score for the Blue Spot jazz club scene, in which he plays a smoking drums solo. The acoustic piano melody and solo on “Blue Spot” were also performed (off camera) by Alphonse Mouzon. MOUZON’s music can be heard on the soundtrack for the 1997 film by actress Tisha Campbell called SPRUNG. ALPHONSE MOUZON can also be seen in a 2004 movie with Michael Keaton, Margaret Collins, and Katie Holmes called “FIRST DAUGHTER”. ALPHONSE MOUZON composed the original music score for the brilliant short film by former jazz critic and now writer/director Dan Margules called BEGLEITER. MOUZON acted in the 2009 feature film by actor/director Robert Davi and Chazz Palminteri called THE DUKES.

Alphonse, Sr. will producing Jazz, Pop /Dance CDs for his 15 year-old academically & musically gifted daughter – Painter/Actress,/Singer/Violinist/Pianist/Guitarist Emma Alexandra Mouzon, and a hip-hop/rap CDs for his youngest son Rapper and U.S. Coast Guardsman Jean-Pierre Mouzon (aka GRIZZLY) on Tenacious Records. Alphonse is a Christian and always has been a believer in Christ and the Almighty, Omnipotent God! Mouzon is a Prostate Cancer survivor who recommends that every man over 35 years old have a PSA blood test done to make sure cancer is not present. Early detection is a lifesaver!

Alphonse Mouzon’s career as a drummer, composer, arranger, producer, actor, multi-instrumentalist, playing jazz, fusion, disco, funk, pop, or rock has delighted generations of fans all over the world, since the time when he was at the forefront of the jazz fusion movement.
As his impressive discography already proved it, his creative drive and audacity didn’t slow down over the years, and “Angel Face” turns out to be another compelling proof of his qualities.

This time he is surrounded by a selected group of jazz personalities well connected with his vision and skills, displaying an impeccable showcase of artistic prowess.

As composer and arranger of all 14 pieces, Alphonse Mouzon directed this dream band with care for details and cohesiveness, giving musicians the partitions that value most their stylistic traits, making sure that their distinguished personalities blend in full power in a united stream.

Working on this foundation, the band puts all its virtuosic spontaneity on display, with Mouzon controlling the overall direction and dynamic, while boldly maneuvering between enthusiastic beats and warmer, soft touches, always showing his natural musicality, propelling forward yet leaving enough space for free improvisational adventures. At his side, we hear master bassists Darek Oleszkiewicz and Christian McBride, accenting details and passages with their trade-marked agility and subtlety.

The common denominator of this solid performance is the irresistible melodic swing flowing throughout, starting with the remarkably animated “Harlem Blues”, featuring Cedar Walton on piano and Don Menza on sax. Arturo Sandoval is drawing attention like a magnet, his magic trumpet can also be heard on “Birds on a Wire” and on the whimsical “Blues Clues” here in dialogue with Don Menza on tenor saxophone and Kenny Barron on piano.

The graceful “A Labor of Love” introduces veterans Bob Mintzer and Wallace Roney, the latter bringing echoes of Miles Davis on “More Miles in the Sky”. Memorable is also the smiling elegant melody of the “Angel Face” with trumpet and tenor sax in perfect fusion.

The album is rich in other pleasant surprises: “Stepping Stone” a dazzling fresh melody with springy harmony vocals , courtesy of Emma Alexandra Mouzon, while Mouzon himself is at the piano on “I Wonder Why” and “Whatever” , opening rhythmic colorful avenues in close harmony with trumpet and saxophones. Shunzo Ohno’s sunny trumpet takes the front stage on the danceable “Night Walker”, then the pace is growing faster on “Never Say Never” where Alphonse Mouzon plays a deep and tender trumpet just before going on an explosive drum solo full of vitality on “Canopus Octopus”.

The album contains alternates version of “Whatever”(with Henry “The Skipper” Franklin on bass) and “Angel Face” with a nice soft tonality of strings weaved by Mouzon.

As a whole, the perfect balance and proportioning of themes, gives “Angel Face” a classical aura of a major work of refined straight-ahead jazz that will please the most sophisticated ears, and takes a definite top place among what Alphonse Mouzon has created so far.

Other Reviews
SCOTT GALLOWAY @ THE URBANMUSICSCENE