Los Angeles, CA…”The One She’s Been Waiting For” is a song close to smooth jazz singer Jan Daley’s heart; and the accompanying video, even more so.  A touching tribute to all the men, women, families and friends of the Armed Forces including her father who perished in Germany in 1945 while on a mission to pick up P.O.W’s, after World War II, whom she never got a chance to meet.

Jan had only ever seen a singular photo of her father until recently while rummaging through a basement after a family member’s death, she came across a box left behind by her mother.  The box contained photos and memorabilia of her late father’s and early photos of the young couple, as well as photos of him while serving in the Armed Forces.  ”The One She’s Been Waiting For” video  showcases those newly found treasures and vintage archival World War II images accompanied by the beautiful song she wrote and performs so eloquently, about him.

The personal and professional highlight of Jan’s career was being the “Singing Canary” on Bob Hope’s USO Tours. Entertaining the troops was special in itself, but inside her heart she always hoped her father was looking down on her with a smile.  You can watch the archival video of one of her stand-out performances here

Following the success of the first CD, she released her newest album (co-produced by legendary Motown Producer Michael B. Sutton) “The Way Of A Woman” in April 2017 and is available now on CD Baby  and iTunes . The album includes “The One She’s Been Waiting For”, however, Jan has released a special Memorial Day Tribute version of the song which you can buy now on CD Baby.   In true Daley fashion as stated on BroadwayWorld.com:  “You feel the song as the story line is presented in a delicate, fragile manner that is expressing the intimate, personal life of two people. The lyrics are touching and I am rather certain that only Jan Daley could bring this track to such masterful heights.”

“The One She’s Been Waiting For” video on YouTube

“When Sunny Gets Blue” Album on iTunes 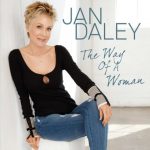