For the past several years, former Yellowjackets bassist and prolific producer Jimmy Haslip has enjoyed an ongoing working relationship with the Bremen, Germany-based jazz fusion keyboardist and composer Michael Schmidt (aka MSM Schmidt). While Haslip played on Schmidt’s 2007 album Transit and 2009’s Destination, he ended up coproducing 2012’s Evolution, 2015’s Utopia and 2017’s Life. They take their chemistry to new heights on ARCeology: The Music of MSM Schmidt.
This dynamic offering finds Haslip and members of his ARC Trio (keyboardist Scott Kinsey and Hungarian drummer Gergö Borlai) joining forces with the GRAMMY® Award-winning John Daversa Big Band on greatly expanded versions of previously recorded Schmidt material, along with two brand new pieces composed by Kinsey and Schmidt. The result is a powerhouse collection of polished, swaggering big band fusion along the lines of the Jaco Pastorius Big Band or The Brecker Brothers’ 2003 collaboration with the WDR Big Band Köln on Some Skunk Funk.

“I wanted to see if I could make this a big band record but somehow make it different,” said Haslip. “I didn’t think it should sound like a vintage big band recording. I wanted it to sound modern and have more of an edge, which is what led me to include guest soloists like Nguyên Lê, Mike Miller, Steve Khan, Oz Noy and others. They bring progressive elements into the big band setting and add compelling ideas to each song.”
Out of the eight songs that appear on ARCeology, six were previously recorded on other Michael Schmidt records. The two brand new compositions here are Schmidt’s “Mirrors” and Kinsey’s “Quartet.” And as Haslip noted, “In approaching this project, there was the thought that if you’re going to redo songs that have already been recorded, what can be done to make them sound like new compositions? And I think with Scott’s rhythm arrangements and John’s input on the horn parts, we came up with some creative solutions.”

Haslip also credited Kinsey, who became de facto co-producer of ARCeology. “Originally, I was the point producer on this whole thing, but as time went on I just knew that Scott needed to be a part of the production team,” he recalled. “We weren’t far into the project when I approached Scott and said, ‘I want you to be my co-producer on this because you’re contributing so much great work and it’s only fair that we do this together.’ He was up for that, so I am happy to say that Scott and I co-produced the record. I can’t take full credit for what’s happened here, as Scott was the real workhorse. He played most of the keyboard and synth parts and did all the keyboard solos, of course. Also, Scott’s rhythm arrangements had a big hand in influencing John’s horn arrangements. There was a lot of cool stuff already in place for John to just embellish. But then again, John has his own unique voice for orchestration. Everything he wrote after the fact was fantastic.”

Marilyn Scott is best known for her Grammy-nominated work as a contemporary jazz musician, having performed with some of the best musicians in the world over the last few decades. The Landscape, Marilyn’s forthcoming album is no exception. Produced by Jimmy Haslip, featuring the sultry dynamic voice of vocalist/lyricist Marilyn Scott with an all-star band as a supporting cast. 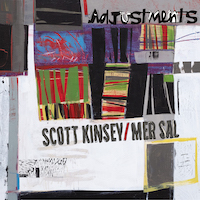 Adjustments, their forthcoming album, is a vocal recording within a fusion instrumental soundtrack. Says Kinsey, “After working for years with lots of guitarists and saxophonists, I’ve come to realize that the voice is in many ways the most expressive instrument of all.”

He once again achieves his signature vibe, aided and abetted by an amazing roster of musicians. But Sal channels this energy into a more thematic direction, with provocative statements about the transition from darker phases into positive change. The album offers a collection of timely originals, while the duo also reimagines rock classics like “Feel Flows”
(The Beach Boys), “Time Out of Mind” (Steely Dan) and “Down to You” (Joni Mitchell), as well as “Jungle Book,” an iconic Weather Report track penned by Joe Zawinul.

Join Scott Kinsey on the next leg of a three- decade musical journey, at once rooted in electric jazz history and blazing a new path with visionary singer-songwriter Mer Sal.