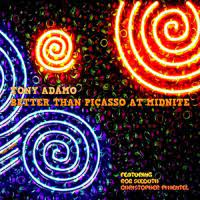 ony Adamo(USA)-Better Than Picasso At MidNite

Well, the blue jeaned, floppy hat wearing singing street preacher Tony Adamo is back with a new upcoming album. Here’s the first single from it, “Better Than Picasso At Midnight”, which is essentially polishing, refurbishing, new engine adding remake of the classic “Better Than Anything” and machine shopped, chopped and hopped by Tony Adamo. The original lyrics are weaved into new stream of consciousness ones which include references and rhymes ranging from George Benson to Superfly. The music itself is a mix of CTI soul with a dash of disco, tasty Breezin’ guitar licks with a mix of wacka wooka by Chris Pimentel, Turrentine toned tenor treats from saxist Rob Sudduth and Crusading keys and beats from programmer Barry Schiffman. No one delivers street corner synchronized sermons like Tony A. Start passing the plate! by George W. Harris/Jazz Weekly
Website CD Store

Iremia takes inspiration from the picturesque island of Paros, and meaning ‘peacefulness’ in Greek, which is perfectly encapsulated with the single’s soothing and calming nature.

Dan initially studied classical piano for six years at the Académie de Musique Rainier III in the south of France, as well as jazz, and wrote his first composition at the age of twelve. In 2010, he was awarded a diploma with merit at Sir Paul McCartney’s Liverpool Institute for Performing Arts in the UK. Dan’s strong interest in his Latin roots coupled with his passion for jazz led him to study at the Escola Superior de Música e Artes do Espetáculo in Portugal, where he graduated in jazz piano with a Rotary Club award for outstanding achievement in 2015.

During his course, he was also awarded a merit grant to study Brazilian music at UNICAMP –Universidade Estadual de Campinas (São Paulo, Brazil). He pursued further studies at Berklee College of Music with a scholarship for outstanding achievement.

Costa has attended workshops and classes given by musical artists such as Gary Burton, Kevin Hays, Scott Colley, Kurt Rosenwinkel, Jorge Rossy, Chick Corea and César Camargo Mariano. Additionally, Dan has co-directed musicals, performed with orchestras and big bands, and starred as both a pianist and composer in projects in countries such as the UK, France, Finland, Germany, Spain, Greece and the USA.

In January 2016, he recorded his debut album Suíte Três Rios in Rio de Janeiro, Brazil, with musicians such as Jaques Morelenbaum, Ricardo Silveira, Teco Cardoso, Rafael Barata, Marcos Suzano and Leila Pinheiro. It peaked at #1 on the iTunes Jazz Chart and Top 10 across all genres in Portugal, prior to hitting the #1slot on the CMJ Top Adds Chart in the USA and being top 10 for several weeks on Roots Music Report.

In recent years from 2018 to present day, Dan’s music has received rave reviews from the likes of JAZZIZ, Rolling Stone India, Jazz FM, All About JAZZ, Down Beat Magazine, The Jazz Word and so forth.

TriTone Asylum is based in Southern California. Spear-headed by Peter Sepsis (bass) and Philip Topping (EVI). Through their unique instrumentation, they have masterfully developed an electro acoustic sound that melds Jazz, funk, and music from around the world. TriTone Asylum’s music reflects the varied musical landscape of the sounds and street rhythms of Los Angeles. Their original songs are influenced by a variety of artists including Freddie Hubbard, Herbie Hancock, Weather Report, Pat Metheny, as well as artists from the ECM Label.

The title Long Way Home is inspired by Greek poet Konstantinos Kavafis, in particular the poem “Ithaca.” We become who we are, Angelakis suggests, through the voyages we take, and this is in fact the voyage’s ultimate goal. Wise words from a musician who has undertaken extensive journeys of his own: professional experience in Europe as a leader and sideman and Europe with Petros Klampanis, Horacio “El Negro” Hernandez (George Fakanas Group), Milcho Leviev and Paris Strother (Prince); graduate work in Philadelphia with Tony Miceli (2013) and with Christos Rafalides in New York; recording sessions and live appearances on the East Coast, not to mention a yearlong sojourn in China.

All these experiences inform the beautiful Long Way Home. The five original pieces each tell a story, most of them gleaned from inspirations particular to Greece, even as the music reflects Angelakis’ immersion in the sound and culture of American jazz. There are three songs from the jazz canon, including Bill Evans’ harmonically challenging “Very Early” and the enduring ballad “Polka Dots and Moonbeams” (on solo vibraphone). “Coral Keys,” by the late pianist Walter Bishop, Jr., prompts the quartet to stretch on music from the heart of the post-bop tradition that remains a touchstone for all involved. Harking back to the “Ithaca” theme, “Ulysses’ Journey” is inspired by the Homeric epic and the poem Ithaka from the moden Greek Poet Konstantinos Kavafis.
Website

As a result of all this enormous trajectory Iñaki Arakistain presents us his 5th studio
ALBUM, entitled “THE SUN SHINES AGAIN” (preceded by: “Tiempos de búsqueda” 2008,
“Plan B” 2010, “Saxual “2014 and “Another Road” 2018), a new musical approach, always
accompanied by excellent musicians from the national and international scene, loaded
with good Jazz, Groove and Latin Jazz that mixes exotic sounds and roots as deep as
Flamenco fusion and Afro-American music such as Jazz Funk.

Elegantly constructed harmonizations and new sounds that travel towards a new musical direction from the most
disturbing heart of this experienced and experimental saxophonist.

Author’s Note:
Despite the fact that we are still immersed in crisis and uncertainties in the pandemic horizon, these compositions have emerged during this period. I have tried to reflect past experiences (in terms of my musical influences) and experiences lived through music, filtering them with this complicated period. I have tried to make my compositions fundamentally reflect hope and a new post-pandemic era.
Iñaki Arakistain